We were recently hosted by the Florence, SC Convention and Visitors Bureau to explore things to do in Florence with kids. Although this trip was hosted, all thoughts and opinions are my own.

If you’ve been around for a while, then you’ve probably figured out that I’m a sucker for history. Lucky for us, Florence has a lot of it, and there’s plenty of entertaining things to do in Florence with kids that involve history as well. We did an overnight trip and were able to fit in quite a bit, however, there’s still quite a bit to do. It’s also a good halfway point for you upper east coasters making your way down to Florida for the winter. 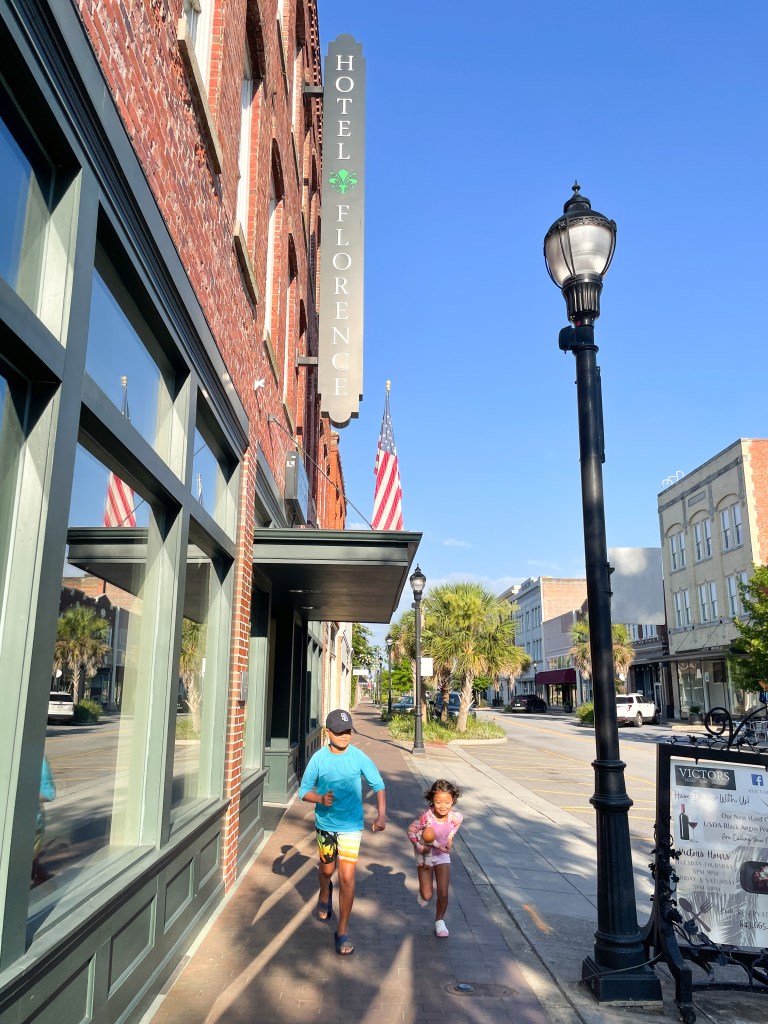 History of Florence with kids

Here’s the short rundown of the quick history I gave my kids as I was learning myself. The city of Florence is named after General William Wallace Harllee’s daughter, Florence, and once produced indigo, cotton, naval stores and timber. The General was the President of the Wilmington and Manchester Railroad, which played a huge role in the American Civil War, since it was an important supply and railroad repair station for the Confederacy. In the 20th century, after the war, the healthcare industry became an important factor to its economy since there were two big hospitals, and pharmaceuticals were produced here. Soon after, when we entered WWII, other than pharmaceuticals, things like textiles, paper, and ag products were what Florence was known for.

**Bonus! If you want to check out the grave of the General and his daughter, check out this link for it’s location.** 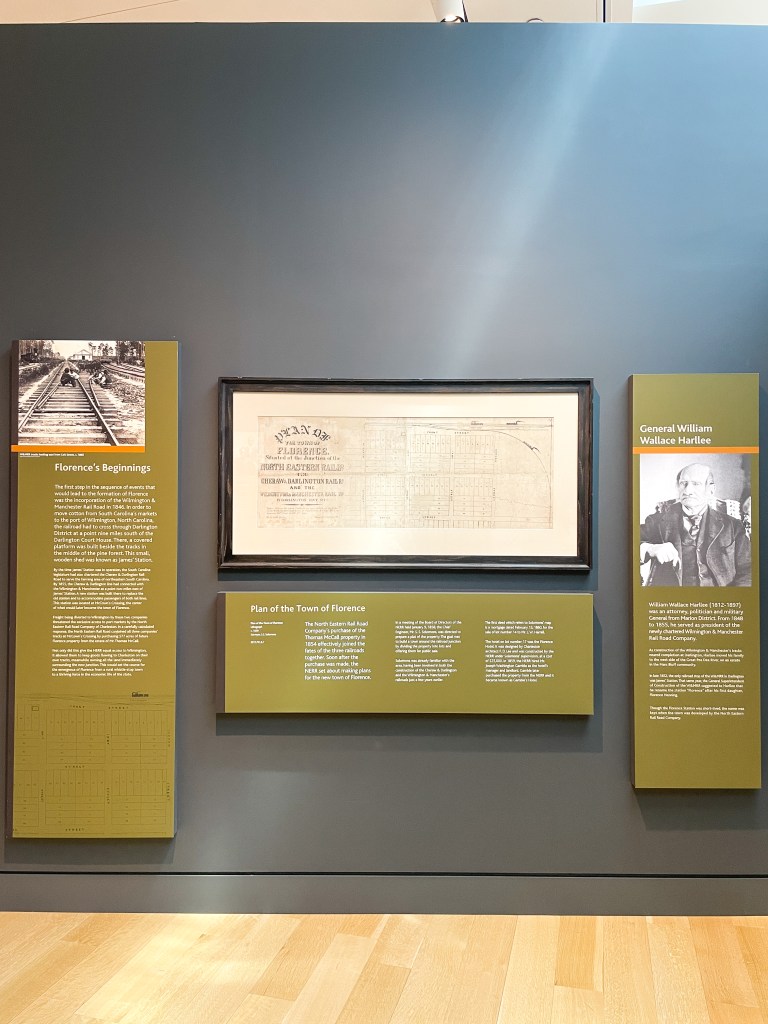 Now for more recent events, the city of Florence began a massive redevelopment project in 2010 (to the tune of 18 MILLION dollars) to revitalize its downtown area, giving life back to abandoned buildings, and old historic buildings. What once was old, is new again, and there for you to explore and learn about.

Where to stay in Florence with kids

Hotel Florence opened in 2013 as part of the redevelopment project I mentioned above. And for a little fun history on this one – part of this building was actually a hotel at the turn of the 20th century. A portion of it was a general store, but it caught fire in 1899, however, the hotel made it.

Now about the hotel… SOOOOO Cute! I love that there’s a slight railroad theme, but still chic and has that boutique… because it is. The hotel doesn’t have a pool, but it does have a fitness center, business lounge, a spa, on-site restaurant, and it’s close to the restaurants and shops in the historic downtown.

Where to eat in Florence with kids

We were headed to Florence after Five, after dinner and this was right outside. It’s been named as one of South Carolina’s top 10 BBQ restaurants, and I wish we could’ve experienced or tasted more. With the national supply chain shortages effecting just about everything, a lot of what we wanted were out. Other than the brisket, what we did have was good, so that’s a good sign. I will have to note that I’m not a huge fan of brisket east of Texas, so it may be good to others.

I don’t know why, but my favorite BBQ has been ones that are connected to convenience stores. The food was DELICIOUS and if Kelsey’s dancing, it’s good. There are so many options that you can’t go wrong with whatever you choose. The food is fresh, and laid out cafeteria style so you see it all.

Victor’s was voted as the Best Fine Dining restaurant in Florence, and it’s connected to Hotel Florence. There’s really cute outdoor seating, and the atmosphere looks amazing. We did an early breakfast before we headed out for our day of activities. It’s a continental breakfast until brunch begins at 10 am, however, there were breakfast sandwiches on the menu. I love me a good breakfast sandwich, and when it’s on a croissant… I’m sold! Tyler and Carter had a breakfast sandwich too, and Kelsey had some bacon and toast since she’s allergic to eggs.

Things to do in Florence with kids

This is definitely not your average gas station. It’s a full on shopping center with really good food and overpriced knick-knacks. It’s a must stop just to get the experience in and say you’ve gone. The signs leading up to the store say to do it for the ‘gram, so you should do it. The kids wanted everything so I was really quick to grab them by the hands and head straight for food, the cashier, and out the door. It was really crowded, but the atmosphere was fun.

200 Alumni Drive, Florence (planetarium is located on the right) – https://astro.fmarion.edu

This isn’t just cool and fun for the kids, but for adults too! There’s a few different shows you can catch, however, we watched the life in color. It’s pretty amazing to be able to watch a show on a big dome that really makes you feel like you’re right there with it. After the show, we learned about planets, constellations, and did some hands on exhibits. The public shows are not currently playing due to Covie, however, you can schedule private showings.

Visiting the Florence County Museum really taught us a lot about the history and lifestyle of Florence. There are artifacts from the civil war, fossils from Megladons and other animals, and more. There are also some hands on activities to keep the kids engaged. It’s a smaller museum so you can go through it fairly quickly.

This is an event that runs the last Friday of every month from May through September. It’s a fun block party with live music from cover bands, vendors from the local shops line up, and of course dancing! If you happen to be in town on the last Friday, it’s definitely worth checking out. It was named “Best Concert Venue,” “Best Place to Dance,” “Best Outdoor Event,” “Best Local Concert,” and “Best Place for Live Music.”

We had such a great time with this one. We’re even planning on going back in the fall to kayak while the leaves are changing. We were a little nervous about running into gators, but we didn’t see one in sight, and the guides said that they don’t really see them out there. The water is shallow as well so that eased a little bit of fear for me with having kids with us while kayaking, and I was able to have Kelsey sit with me since she was small.

Also a little bit of info about how this all works, because I really had no clue…. You first drive to River Rat’s, sign your waiver, gather your lifejackets, and snacks, then you wait for a van to come pick you up. You then get driven to another location, which I believe was called, “The Other Place,” and that’s where you get on your kayak and start kayaking down the Lynches River. You’re going with the flow of the water, so it really helped with saving our arm muscles. The trip we took was a 5 mile route that led us back to the first location, and took us about 2 or 3 hours. There are several other kayaking routes you can take that go up to 10 miles, and there’s also a Revolutionary Trail tour.

We ran out of time so weren’t able to visit the Lynches River County Park, so we’ll have to check it out next time. Here’s the description that the Florence CVB gave me:

“Lynches River County Park, a popular day-use park in Florence County, features a river swamp with towering cypress trees as well as sand hills offering a wide variety of vegetation. Popular activities include river fishing, canoeing, nature trails, a splash pad open during summer months, and an Environmental Discovery Center. Check out the swinging boardwalk for a bird’s eye view of the park! Lynches River County Park also has cozy cabins for an overnight stay, or rustic campsites for the more adventurous.” And there you have it. I’d definitely recommend a visit if you’re looking to plan a weekend trip or if you’re making your way from the north down to the south. Make sure to read up on more of our South Carolina travels here.