Last November, we had the incredible honor of visiting Fort Moultrie on Veteran’s Day with our very own special Veteran, Cousin Robby. We had such a fun time and of course, learned so much. The kids became Junior Rangers, and even got a nice surprise at the end. 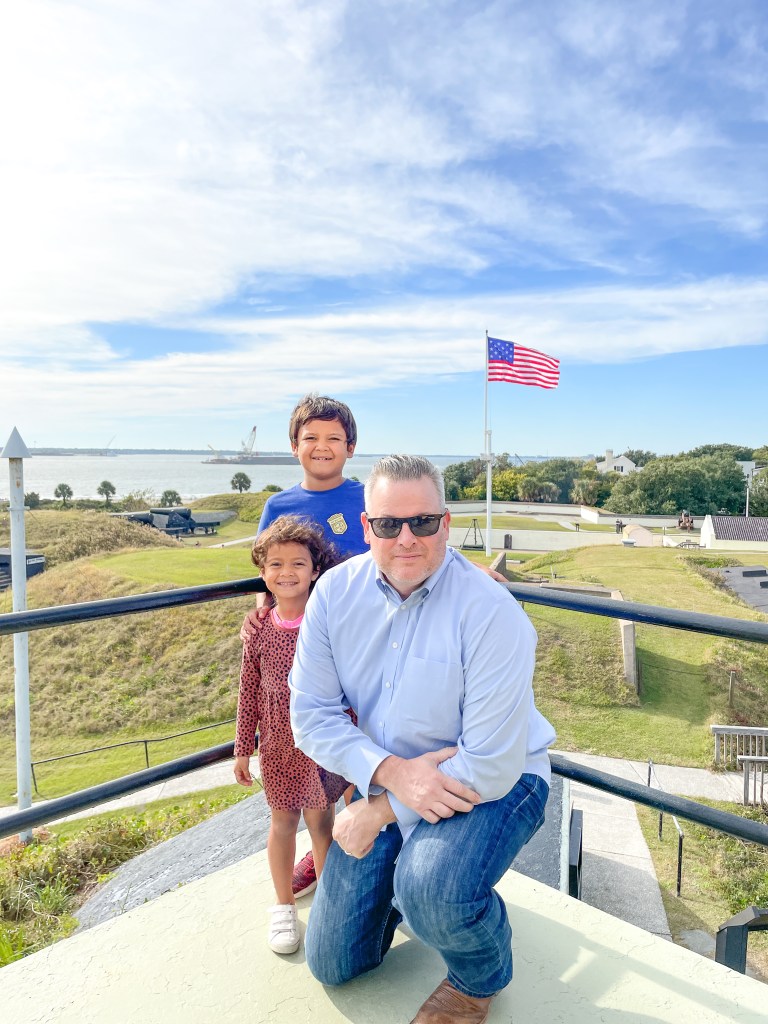 Fort Moultrie is located in Sullivan’s Island, which is a part of Charleston County, and was actually called Fort Sullivan at the time. It was built using palmetto logs, and was built to protect the city of Charleston, SC during the American Revolutionary War, in the Battle of Sullivan’s Island. The palmetto actually held up really well against the cannons being shot at it because the logs absorbed the shots instead of breaking it. This of course inspired state flag and nickname of “The Palmetto State.”

Colonel Moultrie – who was in command at the time – and his 400 men, fought, destroyed, and scared the British ships away. South Carolina was super stoked about this and honored the Colonel by renaming the fort after him. Don’t celebrate too early though, because the British said “neener, neener, neener,” and ended up capturing Fort Moultrie and renaming it Fort Arbuthnot, during the Siege of Charleston. Boooooo… But wait – it get’s better. The British lost and guess what? Fort Moultrie got it’s name back. Phew! 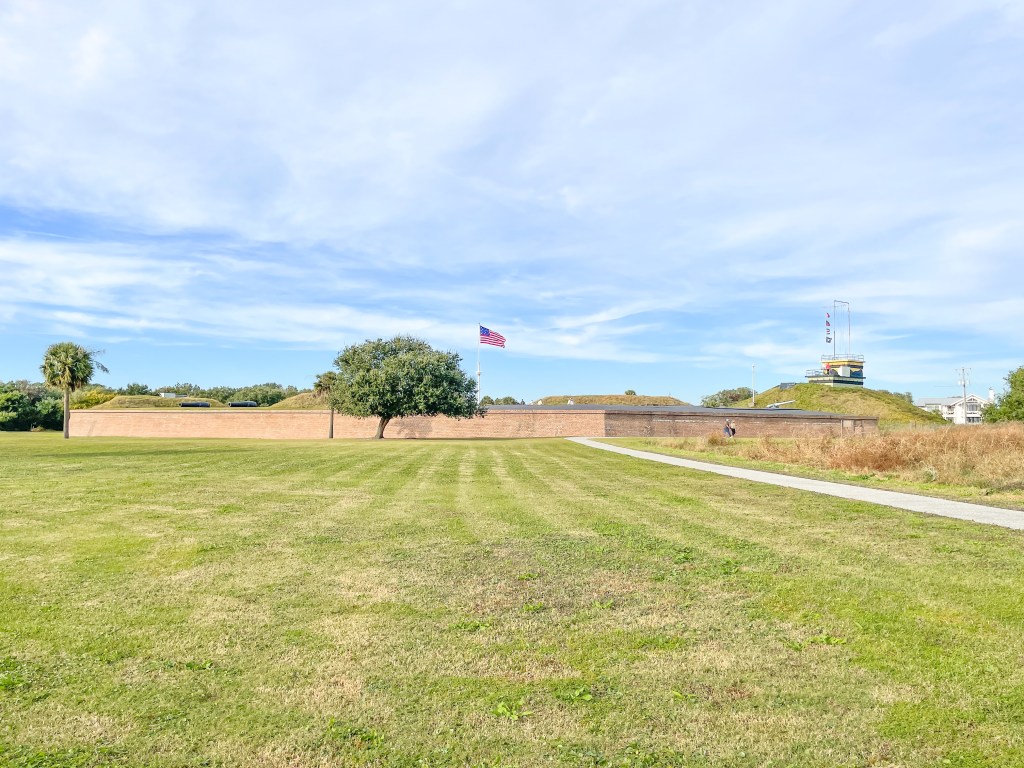 Know before you go

Unless you’re under 15 or have an Interagency Military or Access pass, there is a fee to enter Fort Moultrie. Check the website for up-to-date info like fees and hours  here. The historical park is all caught up with the time and no longer accepts cash, so make sure you have your plastics or digital payments handy. Don’t try to be sneaky and go directly into the monument, because you’ll get in trouble. You have to enter the Visitor’s Center first, pay, watch a short film, then be on your merry way.

Be a Junior Ranger

I mentioned earlier that the Sprouts became Junior Rangers. If you’re wondering how your little ones can do that, then read on my friends…

After you watch the short film, you’ll exit the theater. Look for one of the rangers or volunteers and let them know that your child wants to be a Junior Ranger. The kids get a booklet with activities and questions they need to answer. If you want to be ahead of the game, you can click this link and print out your own copy as well. Walk around the visitor’s center and start finding the answers to those questions in the booklet.

Once your kiddos are done, find a ranger or volunteer again and let them know that you’ve completed the activities. The ranger or volunteer will swear the kiddos in, and then they get pinned with a Junior Ranger badge. Kelsey took it very seriously and even tried to play tour guide with us and really put us in line!

There are two types of tours that are offered – guided and self-guided. There isn’t an additional fee for the guided tour, but we opted for the self-guided because we like to go at our own pace with the kids, which is usually fast paced. The short film that is played before you start your tour really teaches you a lot about the history of the fort, so make sure everyone pays attention. The visitor’s center has a lot of displays and information as well, so don’t rush out of there too quickly to get to the fort. 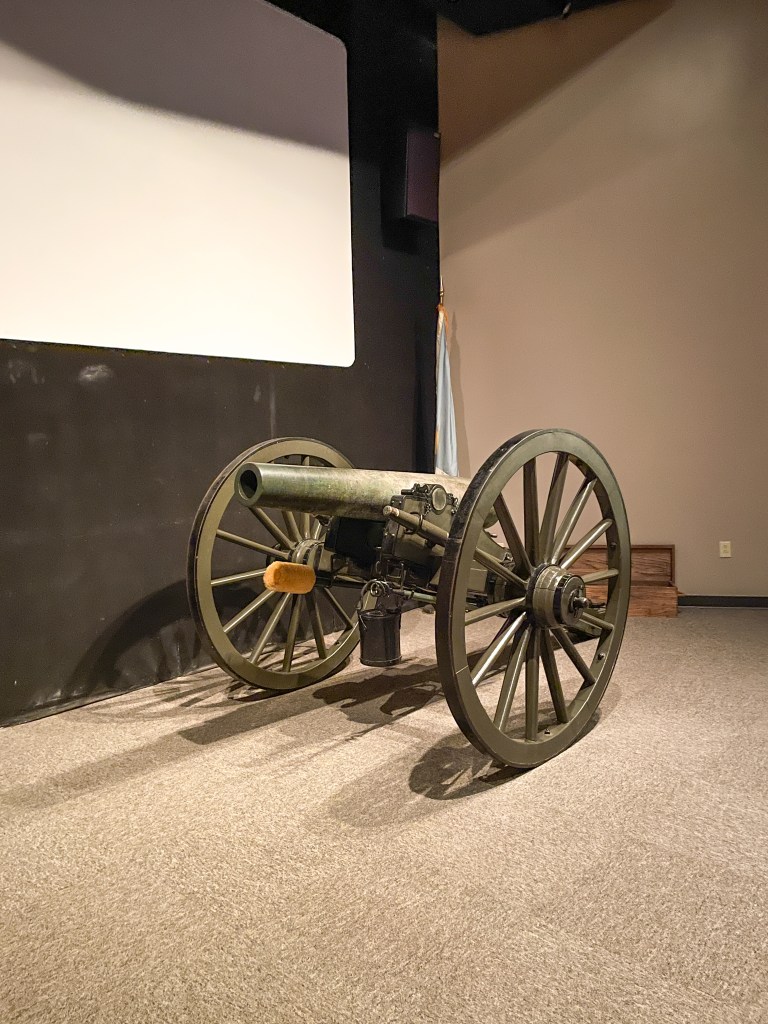 Once you leave the Visitor’s Center, you’ll cross the street and enter the Fort. Be prepared to climb stairs, go through tunnels and just have fun. There are some really nice views if you get high enough, and you can even see Fort Sumter if it’s clear. Make sure to keep a good eye on the kids because there are cannons and artillery they could bump into if they’re just willy nilly running all over the place. There are information panels all over the park too, so read up and learn some, because you won’t have a guide telling you about it.

Outside the fort’s walls

If you have time, make sure you check out the area outside of the walls. There are some cool cannons to look at and it’s a nice stroll. If you cut through the path at the end, it’ll lead you to the nice little surprise I mentioned earlier – THE BEACH! There’s other ways you can access the beach, but it was just nice that we stumbled upon it, and we weren’t even looking for it. Just make sure you read the posted signs and follow the rules. Swimming in the water isn’t allowed so head down to one of the beaches on Sullivan’s Island if you want to do that. Our boogie boards ended up being more for sitting around on there. You don’t want to leave with a hefty fine to damper your day.

And there you have it friends. The self-guided tour of Fort Moultrie. Be sure to visit Fort Sumter as well so you can the full effect of the two forts, and let me know if you go.