I’m kicking off my South Carolina State Parks series with a day trip to Colonial Dorchester State Historic Site in Summerville, SC. It’s 1 of 47 state parks in South Carolina, and our goal is to visit 12 of them before our passes expire in November. See how I’m being proactive here? New Year’s resolutions way before the new year (insert high five here)! I’d be lying if I said I was doing it all for the outdoors though, lol. I’m all about collecting those Ultimate Outsider stamps… and to explore… I do like the outdoors… a little bit =) 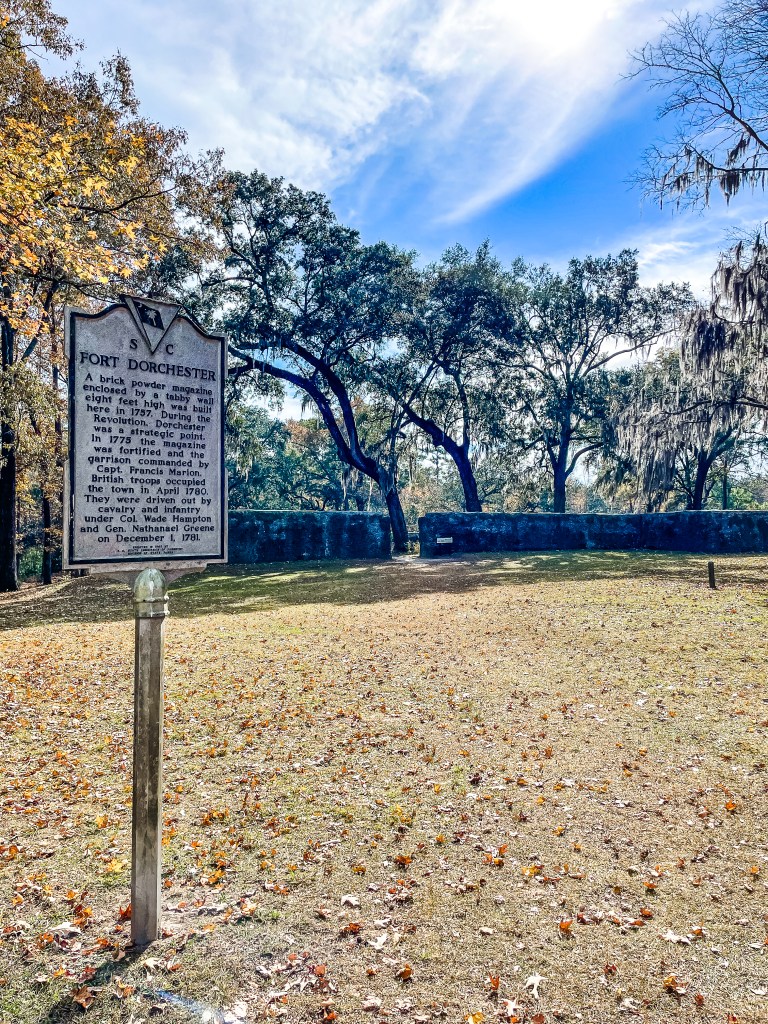 Know before you go to Colonial Dorchester

Hours: 9am-6pm daylight savings & 9am-5pm the rest of the year

Pet restrictions: Must be on a leash with maximum six feet length in most areas. Not allowed in or around lodging facilities, and will be asked to be removed if they are a nuisance.

Wifi reception: I barely had any reception while I was at the park itself, but I had a few bars in the parking lot.

The state of South Carolina is definitely not lacking in any sort of history, so it’s no shocker that there’s a whole bunch of history at the Colonial Dorchester Historic Site as well. It dates all the way back to 1697 and was abandoned at the beginning of the Revolutionary War. Colonial Dorchester is located in Summerville, SC now, but it used to be called the town of Dorchester. It slowly disappeared, however, you can still see some of the original structures. We’ll get into all of that later.

What to do at Colonial Dorchester

The nice thing about the location of Colonial Dorchester is that you can spend as little or as much time as you want there. It’s in not way out in the middle of nowhere, and there’s plenty of things to do and places to visit after you’re done.

The trails are really kid friendly and totally walkable. It’s not steep and you’re not dealing with cliffs. The only precaution would be to watch out for snakes and the good ole gator(s), which we’ve never run into. There are kiosks and exhibits throughout that explain the history of the area that you’re at as well. Also keep in mind that these are walking trails and not biking trails.

This fort is really cool once you get up close and learn a little about it. It was built in 1757, and is made of tabby, which is an oyster shell concrete. The SC State Park website states that it’s the best-preserved tabby fortification in the nation! Who knew?!?!? When you walk through the fort, you can see the ruins of the powder magazine (gun powder storage) in the middle. If you keep walking, there’s a beautiful view of the Ashley River.

Speaking of the river – fishing is allowed, but with limitations. You can fish in the area behind the fort or the area behind the restrooms, and a South Carolina freshwater fishing license is required. There’s also no boat launch, but if you drive towards the Dunkin’ Donuts on Ladson Rd, there is an access there.

If you look towards the parking lot, there’s an entrance to the trail to the left by the park map (also where the Ultimate Outsider stamp is). That’s the direction you should walk if you want to hit up the picnic tables first. Keep in mind that here aren’t any grills here, and you’re not allowed to grill with your own grill either. So make sure to pack ready to eat food, clean up after yourself, and enjoy the river view.

The bell tower of St. George’s Anglican Church is what most people probably associate Colonial Dorchester with. My kids love running through and exploring what’s left of the Church, and reading the names on the tombstones. There’s also a huge grassy area leading up to the bell tower that you can let the kids get wild on. I’ve got a ton of shots of the bell tower below, so you can’t forget what it looks like.

Other things to do

There’s a couple of other things you can do while you’re at the Colonial Dorchester Historic Site, but you have to keep an eye on the calendar and the water level. When the tide is low on the Ashley River, you can see part of a log wharf that used to be the highway in the town of Dorchester. There’s also certain times of the year when archaeologists come out to do their archaeology things to uncover more history. It’s open to the public and I bet is really cool to see.

And that’s all folks! It’s always a great thing when we go somewhere as a family and everyone has fun, and I can force some learning in without complaints. If you need some other ideas for things to do in the Charleston area, be sure to click this link that will be growing as we explore more. Have you ever been to Colonial Dorchester or any of the other SC State Parks? I’d love to hear all about! Until next time my friends…