Happy Thursday all! In honor of fall, I wanted to bring this post back up from when I was running my other blog, Mince and Mingle (it’s an older post so don’t mind the picture quality). Before my daughter was born (I’m pretty sure this is where she was conceived…OVERSHARE) my husband and I went on our Adult/Business trip to parts of New England (we do one big trip with kids, and one without). We went to Boston for 3 days and Newport, RI for 7. The leaves were just starting to change, and oh my, it was GORGEOUS!

We went right after Columbus weekend so a lot of the water activities and tours (for tourists) were already closed down for the season, but have no fear… there were still a ton to do. We didn’t stay in Boston because it was out of our budget, however, if we could do it again, it would’ve been worth it to stay in Boston itself. We also didn’t have a rental car because you have to pay everywhere you go in Boston, but everything was still do-able and we did everything on our list except for 2 things – The Freedom Trail and the Sam Adam’s Brewery Tour. I hear they’re must do’s… so be sure to do them. And be sure to get a Boston Go Card  before you do (no this isn’t a sponsored post). Everything you probably want to do or plan to do is already on there and it saves you soooo much money – especially if you’re on a budget! Now get ready… this is a long post. If you don’t want to stick around, here’s the cheat sheet: 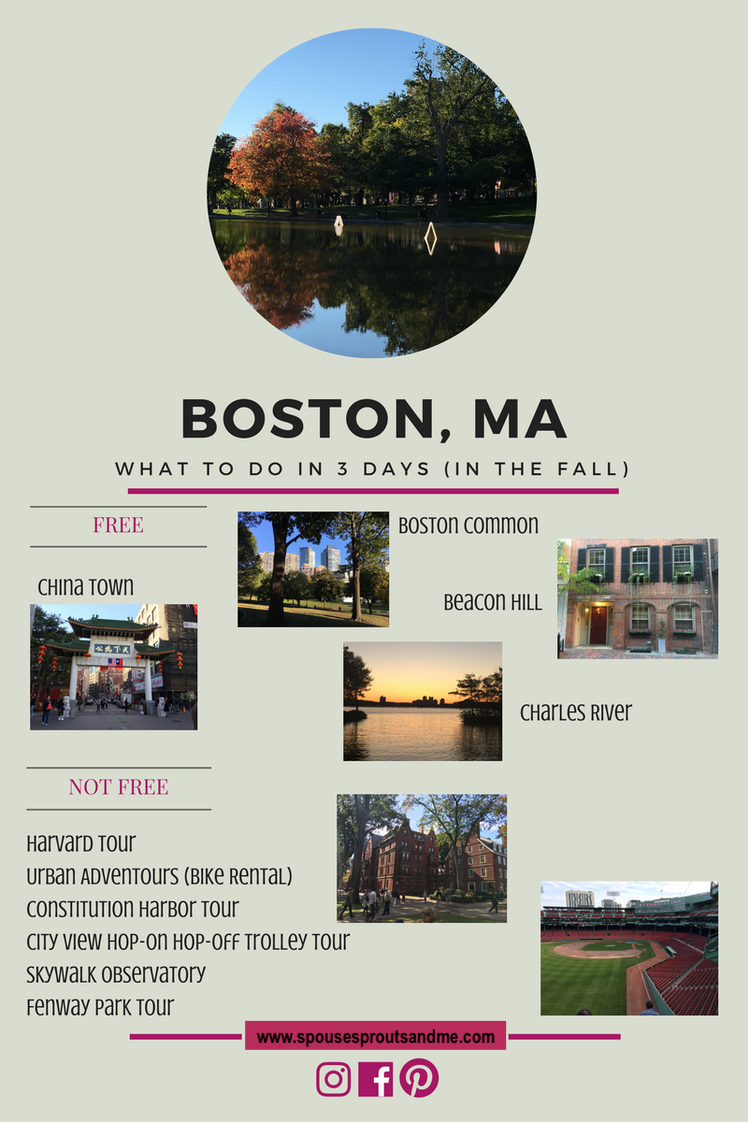 China Town: I was quite surprised to see that there was a China Town in Boston. It’s a quick walk thru and probably the cleanest China Town I’ve seen.

Boston Common: We happened to stumble upon the park and had no idea what it was and quite honestly, have never even heard of it. It’s pretty much like Central Park in New York, only it’s the oldest public city park in the United States.

Beacon Hill: It’s such a pretty neighborhood right outside of Boston Common. Well, it’s so pretty because guess what? It’s one of Boston’s most expensive and most desirable neighborhoods! The streets were very narrow (more like alleyways) and there were so many brick side walks. GORGEOUS!!! ***Note to self – DO NOT WHERE STILETTOS!!!***

Charles River: If your feet can handle it, take a stroll through the Charles River. It’s another one of Boston’s beauties. There’s an Esplanade where concerts are held, lots of joggers, and we even saw a college rowing competition! Really cool. We did all of these free things on our first day and logged in over 13 miles walked. It was well worth it.

The Not Free Stuff:

Harvard Tour: Such a prestigious school as it should be. It’s located in Cambridge and just on the other side of the Charles River. It’s a gorgeous community and Harvard? Well, it’s even better. The buildings are beautiful and the history and story behind them all are amazing. So many of our Presidents and quite a few celebrities have attended Harvard itself. It’s definitely worth the hour to hour and half tour.

Crema Cafe: After feeling so scholarly, you should hit up one of the cute coffee shops or cafes. Crema Cafe came highly recommended so that’s where we went. I always have to find a coffee shop with my fancy lattes when I travel. This one hit the spot, perfectly.

Quincy Market: We walked through Quincy Market as we were headed to rent our bikes. It’s a really cute marketplace with great architecture. It’s free to walk thru but definitely not free to eat and shop. **Straight from Wikipedia: “Quincy Market is a historic market complex near Faneuil Hall in downtown Boston, Massachusetts. It was constructed in 1824–26 and named in honor of Mayor Josiah Quincy, who organized its construction without any tax or debt. The market was designated a National Historic Landmark, recognizing its significance as one of the largest market complexes built in the United States in the first half of the 19th century.”** How’s that for some history?!?!

Urban AdvenTours (Bike Rental): Biking is a great way to tour the city from a different perspective. My husband really enjoyed this and said it was one of his favorite things to do when we were in Boston. For me… It was more like trying to stay alive. It’s been a while since I’be been on a bike. The views were pretty spectacular though.

Regina Pizzeria in the North End: The North end is Boston’s Italian section. You just walk by it and the smells draw you in. Don’t even think about driving here at night. It’s PACKED! There were so many restaurants to choose from, but our friends that were just in Boston a few weeks before, referred Regina Pizzaria. A little disclaimer – there is a line that wraps around outside and you will not be seated until your whole party is there.

Skywalk Observatory at the Prudential Tower: I think this is a must do during the day and at night. We checked it out at night because we like to see lights. It’s located the Prudential Building, which is the 2nd tallest building in Boston. It’s a mall, hotel, restaurant, and of course the observatory. You get a headset for the audio tour along with a 360 degree view of Boston.

Constitution Harbor Tour:  It was by complete accident that we took this tour, which I’m glad we did. The tour guide was hilarious (and had an Irish accent). We got to see some beautiful skylines from a different angle and learned some more facts about Boston.

City View Hop On Hop Off Trolley Tour: Although we didn’t do this the first day, I would recommend doing this the first day. Take a tour around Boston then get off where something interested you. You learn a lot of history in a quick amount of time, you can get off and get picked up at the different locations, and it’s good for 2 days.

Hennessy’s: We were originally going to go to the Union Oyster Bar but were drawn into Hennessy’s by the live Irish band. I was actually surprised to hear about the large Irish population in Boston.

And last but not least….

Fenway Park Tour: We almost passed this up since we’re not Sox fans, but I’m glad we didn’t. It looks really small from the outside but it’s pretty decent and cool inside. The history is really awesome as well.

We were able to do all of this in 3 days. More like 2 and a half days. It was so much fun and I can’t wait to go back. Until we meet again….. 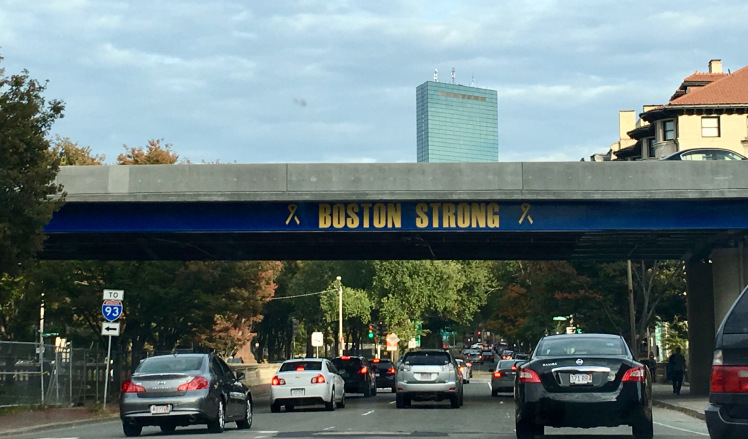